Here and dere we send out emails. If youse guys want 'em : SUBSCRIBE OVER HERE

The “Cheddarhead Dictionary” was created by the CFPB club in 1995 as part of one of our PackerPage articles and it has been copied and passed around the web hundreds of times since.  Here’s the original list.

Ain’a-hey: placed at the end of a profound statement; as in “isn’t it?”

Believe-you-me: attached to the beginning or end of a statement to make it more credible; same as, “really!”

Blue Bullet: a can of Point Special Beer.

Booyah: a thick chicken and vegetable stew sometimes prepared in a large drum and stirred with a canoe paddle at parish picnics.

Born in a barn?: a sarcastic question which usually means you left the door open.

Borrow: used in place of “lend,” as in, “could youse borrow me a couple two-tree bucks?”

Boat: same as “both;” as in, “I own boat a ski-boat and a fishing-boat”; also pronounced as “boad,” but Wisconsinites are usually heard using both.

Brat: a sausage; a Wisconsin tailgate favorite; doesn’t have anything to do with a spoiled kid.

Bring-’em-back: what the loser of the last round of bar dice has to do to start a new game; a term used when shaking dice for drinks down at the tavern.

Bubbler: to the rest of the world outside Wisconsin's borders, it is known as a drinking fountain.

Budge: to merge without permission; cut in; as in "Don't you budge in line for a brat, I was here first!"

By: to; near; as in "Let's go by One Eyed Jack’s," or “She’ll come by Froggers tonight.”  It has nothing to do with a purchase.

Cheddarhead: someone from Wisconsin; see, “Cheesehead.”

Cheesehead: someone from Wisconsin; see, “Cheddarhead.”

Cheese curd: small pieces of fresh cheese that squeak when you bite into them; a parish picnic favorite when deep fried.

Chook: a knit hat worn during winter; without your chook, you’d be shakin’.

Crueller: pronounced, “CRAW-ler;” a log-shaped cake-donut found at every grocery store and gas station in the state.

D: a substitute for words beginning with "TH;" as in "Dat guy over dere in dah Bears shirt is a FIB.”

Dasn’t: shouldn’t; ought not to.

Davenport: what your mom called the sofa; a couch.

Doan-cha-know: usually attached to the end of a statement, don’t-cha-know.

FIB: an acronym; (all we can tell you is that the "I" stands for Illinois); similar to FISH.

FIBTAB: someone from Illinois taking up boat lanes while towing a boat slowly along Highway 51; similar to FISHTAB.

Fifth Quarter: the party, led by the University of Wisconsin marching band, which takes place following each Badgers football game at Camp Randall Stadium; “When you say ‘WI-SCONSIN,’ you’ve said it all!”

Flatlander: Someone from Illinois.

Fleet Farm: a Cheddarhead’s answer to Bloomingdales; sometimes referred to as “Farm & Fleet.”

Geeez! a Wisconsin expletive a bit more harsh that “garsh.”

Go-ahead: proceed; as in, “go-ahead and back up your car.”

Gots: used in place of “have;” as in, “I gots my tickets to watch da Packers play on da Frozen Tundra.”

Grilling-out: what you do at tailgates.

Grundie: when your Froot-of-the-Loom briefs become thong underwear; same as a wedgie.

Hassock: what you put your feet on while sitting on the Davenport.

Horse-a-piece: a phrase used when it doesn’t matter either way; comes from a term used when shaking dice for drinks down at the tavern.

How’s-by-you?: a greeting; the same as, “How is everything?”

Humdinger: a beauty; as in, “dat crappy youse caught up-nort is a real humdinger.”

Ida: short for, “I would have;” as in, “Ida brought some beer, but they were outta Buckhorn at the Citgo.”

John Deere: a Cheesehead's other vehicle.

Kitty-corner: not just across the street, but diagonally on the other side of the intersection; as in, “Me and Scottie tipped a few at the Square in Point before we staggered to the Top Hat, which is located kitty-corner from the American Legion.”

Kringle: it’s a tasty pastry, not Santa Claus, although they are a tasty treat on Christmas morning.

Leine: short for Leinenkugel Beer from Chippewa Falls; cheaper than a Heinie.

Lookin’-to-find: just a strange way of saying you’re searching for something.

Ludefisk: whitefish soaked in brine and drained out; an upper midwest yummy.

M’wakee: Wisconsin's largest city; located just down the lake from Trivers and Mantwoc.

N-so?: a word inserted at the end of a statement; used as a substitute for "right?" or "correct?"

Oh, yah: depending on emphasis, it’s either used as acknowledgment (as in, “that’s correct”) or skepticism (“that’s bull”).

Opening Day: no, not the Brewers’ first home game, instead it’s the first day of hunting season.

Ort: sometimes heard used instead of “at.”

Pert-neer: near; in close proximity; just about.

Pig, the: nickname for those Piggly Wiggly grocery stores.

Polka: what you do at parish picnics.

Rubbers: prophylactics for your shoes; also known as “galoshes.”

Scansin: the state where Cheeseheads are from.

Schmelt: the common name for any of several species of slender, small marine and freshwater trout-like fish of the family Osmeridae of the northern hemisphere characterized by the presence of a small adipose fin on the dorsal surface of the body, and by rather large scales which readily fall off; tasty little buggers too when degutted, deep fried and then eaten whole, bones and all.

Shunta: same as, “shouldn’t have;”

Side-by-each: used instead of, “next to each other.”

Skootch: to slide your butt over just a little bit.

Spider: usually a round frying pan made of cast iron.

Start wit me last: to forfeit your turn.

Stop-and-go lights: what everyone else refers to as traffic signals.

Tailgate: a pre-game food fest invented outside of Lambeau Field.

Tap: another name for a tavern.

Tipping: what Cheeseheads do more to cows than bartenders.

Tombstone: a Medford-made pizza; not just something in a graveyard.

Tripp: a sausage made with cabbage and pork that when cooked has the same odor as something you might scrape off of your shoe.

Turn-the-corner-round: to turn around the corner.

Turned-round: what happens when you get lost.

TYME machine: a Wisconsin ATM; not what Michael J. Fox used in “Back To The Future.”

Uff-dah: an expression of weariness or exertion.

Up-nort: where most Wisconsinites go on vacation after the lakes un-thaw.

Up-side right: right side up.

Waffle Stompers: heavy duty boots that leave a tire-like imprint when you walk through snow or mud.

Warsh: what one does to dirty dishes or laundry.

Where-bouts: locality; proximity; as in, “where-bouts are youse guys from?”

With: a word many Cheeseheads end sentences with; as in, “I’m gonna watch the Packers play, wanna come with?”

Yooper: someone from even further up-nort than you; the U.P.

Zink: where you warsh the dishes 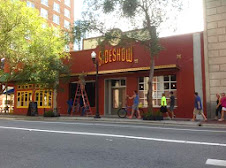 previously 'One Eyed Jacks' and 'The Loaded Hog' 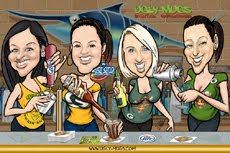 The wonderful (and beautiful) bartenders and wait staff at Central Florida Packer Backer headquarters at SIDESHOW! Be sure to let them know your a Green Bay fan and you may just get a discount! Sadly, anti-discrimination laws say that Bears fans can not be turned away at the door, but if your from Chicago, remember that it's cash only! 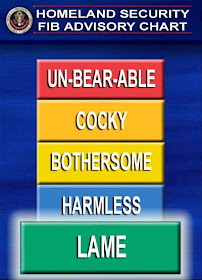 After dropping several consecutive games, missing the play-offs and supplementing their income by selling cocaine, we are happy to inform the Packer public that the Chicago Bears "Threat Level" has been downgraded to "LAME." Incidentally, the NFL has relocated Bears to the league's "Black & Blow" division. 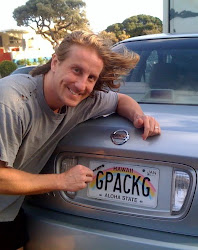 "I love Hawaii, but that drive from Los Angeles to Honolulu was a bitch!" 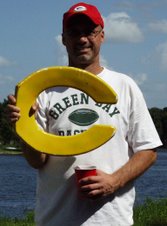 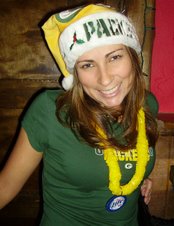 Packer Gretchen says: "Be sure to come back and visit our CFPB website again soon as we'll update it often! My advice: make this site your homepage, homey... or people might start thinking your one of those damn Bears fans. See you at One Eyed! xoxo!!!"